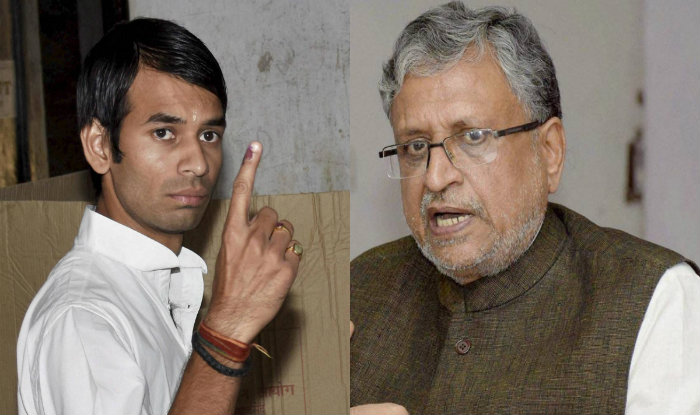 As the assembly elections in Bihar are fast approaching, the leaders of Bihar are uprooting the political pits of their rival leaders. Bihar Deputy CM Sushil Modi has once again attacked the Lalu family. In this attack, Sushil Modi called Lalu Yadav even powerless, while Lalu Yadav’s son Tej Pratap was called a flute player and jalebi vendor.

Sushil Modi fiercely attacked the Lalu family in his tweet. Modi said that Lalu Prasad, convicted in four cases of fodder scam, cannot contest elections due to legal obligation. Further taking a dig at RJP Supremo and his son Tej Pratap Modi said that Lalu has become powerless as RJD chief and as a father. “Lalu’s son is hurting Raghuvansh Prasad Singh, his close friend, by finalizing the deal to bring the Bahubali leader Rama Singh of the other party to the RJD, but they kept calling Raghuvansh Prasad Singh ‘guardian’ just to keep a clean face. On the other hand, the second son (Tej Pratap) described the “guardian” as “a mug of water” while comparing RJD with and Ocean,” said Modi.

Modi further Taunted Tej Pratap through his tweet as his tweet read, “Lalu made his son, who has skills like playing the flute and making Jalebi, the Health Minister as he became the MLA for the first time. But Lalu never asked his son that in the 19 months of his tenure as health minister what arrangements did he make for good treatment of the poor.”

Modi also took a shot at Lalu’s meeting with Tej Pratap in Ranchi as he tweeted, “When Lalu could not stop Tej Pratap from making statements like, ‘will peel of PM’s skin’, Who is Chandrika Rai’ what Guru mantra is he going to give his son in Ranchi. Whatever they do the crown prince of RJD will definitely drown the party.”

Soon after Sushil Modi’s tweet RJD came out in support of Tej Pratap Yadav, former health minister of Bihar, former Union Minister Jayaprakash Yadav has defended Tej Pratap as he said, “Tej Pratap Yadav is definitely the son of Lalu Yadav but voters have made him MLA. He is the people’s representative and only after this did Tej Pratap Yadav become Health Minister.”

Jayaprakash Yadav further added that at least the ruling party should respect the voters’ votes.

Additionally, he said, “Lalu Yadav is a well-known and respected leader of the entire country. Everyone goes to meet them, even if there is an election or no election, hundreds of people go to Ranchi and if they are unable to meet Lalu Ji, they enquire about his health from someone else and return.”

On the other hand, Tej Pratap Yadav has landed in another trouble after meeting his father in Ranchi. An FIR has been lodged against the hotel owner and manager Dushyant Kumar on charges of giving room number 507 to RJD leader Tej Pratap Yadav in Hotel Capital Residency in Chutia police station area of Ranchi, Jharkhand. A case has been registered under section 188/34 in Chutia police station on the statement of the Ranchi Zonal Officer.

AICTE notice 12 Government polytechnic College of UP, Bihar and Uttarakhand