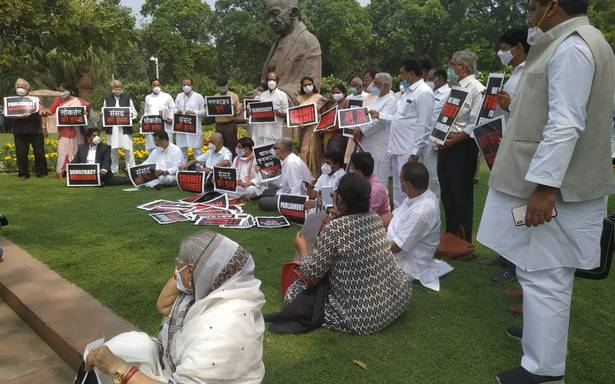 The eight opposition MPs of the Rajya Sabha who were suspended on Monday for the rest of the session for creating ruckus in the House during Sunday’s passing of the farm bills, have refused to leave and continued with their sit-in dharna.

Trinamool Congress’s Derek O’Brien, Aam Aadmi Party’s Sanjay Singh, Congress’s Rajeev Satav, and CPM’s KK Ragesh, who refused to leave, they did eventually depart after a few hours. However, but they went only as far as the parliament lawns, where they spread out sheets and staged a sit-in. They also displayed placards that read – “We will fight for farmers” and “parliament assassinated”.

The MPs spent the whole night on the lawns of the parliament building and they were later joined by other opposition leaders, together they walked to President Ram Nath Kovind’s official residence to apprise him about the issue.

The MPs were suspended for displaying “unruly behavior especially with the Chair and gross disorderly conduct”. While they refused to leave the parliament, the opposition also began shouting in protest that led to five adjournments of the Rajya Sabha.

What irked the opposition is that the members should have been given a chance to explain. The opposition then demanded a vote on their suspension, but the Rajya Sabha said the decision was based on a government motion.

Rajya Sabha chairman Venkaiah Naidu said that he was appalled at the behavior of the MPs.” I am pained at what happened yesterday. It defies logic. It is a bad day for Rajya Sabha,” said Naidu. “I am naming Mr. Derek O Brien. Please go out of the house.”

It was then the suspended MPs refused to leave the parliament and later took to the lawns to sit-in through the night as a protest.

“When the chairman names a member then that member has to leave the House. Never before has a member defied the orders of the Chair. Eight suspended MPs had misbehaved, it was a type of ”goondaism”. They have proved that they have no trust in democracy,” Parliamentary Affairs Minister Prahlad Joshi told the media.

The opposition, on the other hand, said that it was against democracy to suppress the voice of the people. How bills were passed on Sunday was “murder of democracy”, said the opposition.

Rahul Gandhi, who is a vociferous critic of the government and PM Narendra Modi also expressed his displeasure over the incident. “Muting of Democratic India continues: by initially silencing and later, suspending MPs in the Parliament and turning a blind eye to farmers’ concerns on the black agriculture laws. This ‘omniscient’ government’s endless arrogance has brought economic disaster for the entire country,” tweeted Congress leader Rahul Gandhi.

Chanda Kochhar gets bail, court forbids her from leaving country without permission

US on India farm protests: Protest peacefully, farm reforms will only “improve efficiency