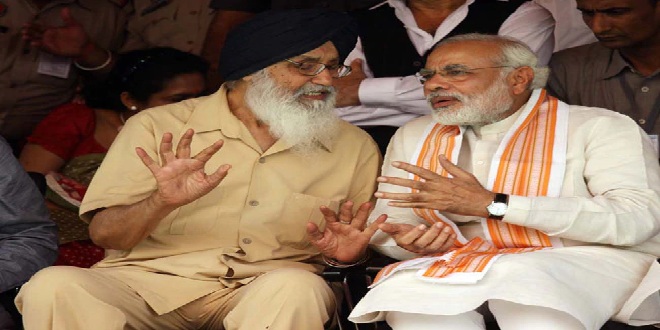 The BJP and the SAD have been allies for decades. The top brass of the BJP always held SAD leaders in high esteem. However, things have changed in the last couple of days after the ruling BJP government’s agriculture bills.

The government wants to liberalize trade in agricultural commodities, which has irked the SAD. As a result, Union minister for food processing Harsimrat Kaur Badal resigned from the Modi government on Thursday to protest against this move of the government.

Peasants are the backbone and vote bank of the Akali Dal in Punjab. “Every Akali is a farmer, and every farmer is an Akali,” said Sukhbir Badal earlier this week.

The reason for the discontentment of the SAD is the three ordinances. These include— The Farmers Produce Trade and Commerce (Promotion and Facilitation) Ordinance, The Essential Commodities (Amendment) Ordinance, 2020, and The Farmers (Empowerment and Protection) Agreement.

Farmers in Haryana and Punjab have been protesting against the ordinances/Bills, and the SAD decides to vote against them. Sukhbir Badal, president of the Akali Dal said that the party hasn’t been consulted whereas his wife Harsimrat Kaur had already told the government about the farmers’ reservations regarding the bills.

In the home turf of the SAD, Punjab, BJP has an image of an urban political force and the junior ally has deep rural connect in the agrarian state.

The SAD-BJP alliance had ruled over Punjab for a decade between 2007 and 2017. This was possible because the SAD could wean away from a section of urban voters, who were Congress loyalists in the past.

The SAD is trying hard to regain their lost ground, which they ceded to the ruling Congress. Moreover, the entry of the new Aam Aadmi Party has also forced the Akali Dal to act aggressively as an opposition.

But, their withdrawal from the NDA government on Thursday also surprised many.

Many say that their timing could not have been more opportune as the SAD is trying to tap its huge rural constituency, where farmers’ issues have been traditional electoral agendas.