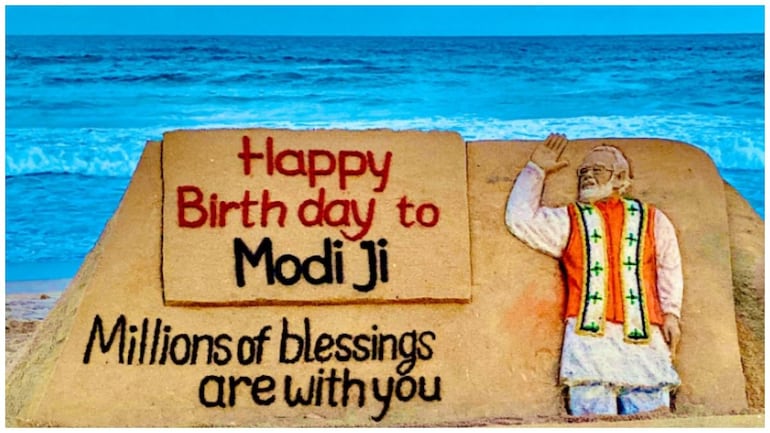 As PM Narendra Modi turns 70 today, the BJP has organised a slew of events to mark the occasion. Sources reveal that a 70 kg laddu has also been prepared to commemorate the occasion.

Wishes from all around have already started coming in, both from within the country and abroad. Rival Congress leader Rahul Gandhi has also wished the PM on this occasion. Although Rahul is a fierce critic of PM Modi and the BJP government, the former Congress President took to Twitter and wished the PM.

Even last year Rahul Gandhi had wished PM Modi on his birthday. “My best wishes to Narendra Modi Ji on his 69th birthday. May he be blessed with good health and happiness always,” Rahul had tweeted, along with a rainbow emoji.

To mark his birthday, the BJP has organised a Seva Saptah from September 14 to 20.

“We are celebrating Prime Minister Narendra Modi”s 70th birthday with Seva Saptah (service week) as he believes in serving people. We also got 70 kg of laddu to make this cake,” said a BJP worker speaking to the media.In PM Modi’s home state Gujarat, the party has offered life insurance to over 20,000 people in Vadodara under the Pradhan Mantri Suraksha Bima Yojana (PMSBY).

“I wish you all the very best in the future – particularly, in these unusual times, health, happiness, and fulfillment,” Merkel wrote in her message. The PMO shared this on its twitter handle. The German Chancellor addressed PM Modi as “Narendra”, and said she had “fond memories” of their meeting at the Indo-German intergovernmental consultations last year.

“Together over the past few years we have succeeded in consolidating even further the traditionally good relations between Indian and Germany,” she added.

Russian President Vladimir Putin was also generous in his message to PM Modi. “I value the kind, friendly relations that have developed between us. I look forward to continuing constructive dialogue with you and work closely together on topical issues of the bilateral and international agenda. From the bottom of my heart, I wish you good health, happiness, well-being, and every success,” read his message for PM Modi.  Lastly, it is his party, which is doing some kind of social work to mark his birthday. The Bharatiya Janata Party has arranged for the distribution of ration amongst the needy, organizing blood donation camps and eye check-up camps to celebrate his birthday.

India’s 1st COVID-19 Vaccine, Covaxin, may be available by end of this year, says Health Minister

First time Modi and Xi on one platform since border imbroglio

Farmers harden stance, say we can also be adamant if government is stubborn