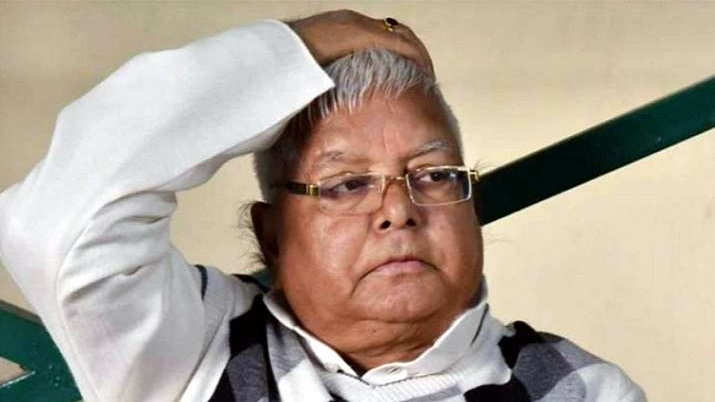 Public interest litigation (PIL) was filed on Monday in the Jharkhand High Court for sending RJD Chief Lalu Prasad Yadav, who is serving a sentence in the fodder scam, from (Rajendra Institute of Medical Sciences) RIMS Director’s bungalow to Birsa Munda Central Jail. The petition alleged that Lalu Prasad Yadav is violating the jail manual and he should be shifted to jail immediately. The petition also argued that allowing the former Bihar chief minister to stay at the Rajendra Institute of Medical Sciences (RIMS) director’s bungalow is erroneous.

The PIL, filed by Bihar resident and law graduate Manish Kumar, alleged that despite being a convict, Lalu Prasad Yadav was meeting several people frequently, which it said is a clear violation of the jail manual.

The Petition further questions that when Lalu was not allowed privileges when he was an accuse then how is it justified to keep him in RIMS Director’s Bungalow when he is a convict in the case?

Union Home Secretary, Home Secretary of Jharkhand, Director of Central Bureau of Investigation (CBI), Ranchi Superintendent of Police are made respondents by the plea in the matter.

It is to be noted that with elections are approaching in Bihar reports claim that Lalu Prasad is commanding the assembly elections in Bihar from Ranchi, the capital of Jharkhand. Reports also claim that leader-activists gather at the RIMS Director’s residence, which has become the party’s undisclosed headquarters.

Bollywood actor Ali Khan also reached out to the RIMS director’s bungalow on Monday for tickets from the Sherghati assembly in Bihar. When he was asked about the purpose of his visit Khan said, “I have come to know Lalu Prasad’s condition and To meet him in the evening.”

When he was asked about his contesting the polls Khan said, “I will contest the polls if he asks me to. I haven’t demanded a ticket from any constituency and I will do as commanded by him.”

Ali had to wait more than three hours outside the director’s residence. Later in the evening, he met Lalu Prasad.

Other than Ali Khan there are also reports that several ticket aspirants are also visiting the bungalow of the RIMS Director daily and dropping their bio-data at the doors of the bungalow. While many leaders were seen handing over their printed bio-data to the security guards at the gates of Kelly’s Bungalow. It was also reported that more than four dozen people, including Prabhavati Devi, state general secretary of Bihar RJD, came from the Makhdumpur Assembly with a bio-data. Earlier on Sunday, Manju Singh from Lalgunj and Anita Rai from Patori constituencies had submitted their bio-data at with hopes of getting a ticket. Sources also claim that more than 200 bio-data from ticket aspirants has been submitted for Lalu’s perusal and a few have also met him personally with help from state RJD leaders.

Punjab-MP at loggerhead over GI tagging of Basmati Rice