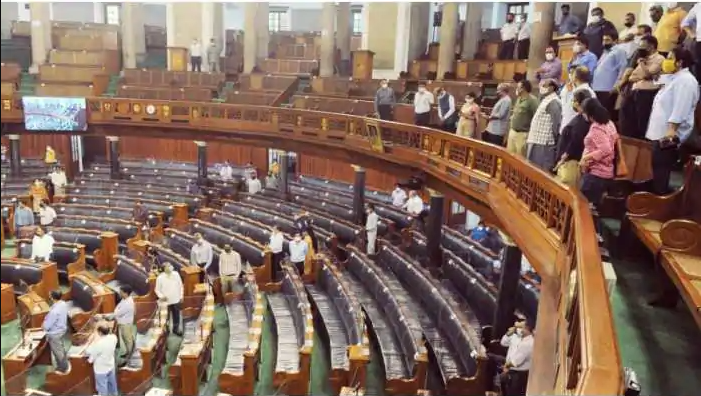 The second day of the monsoon Parliament session started with fireworks from MP and veteran Bollywood actor Jaya Bachchan who trained her guns on KanganaRanaut and BJP MP Ravi Kishan. In her speech, Jaya Bachchan accused both of maligning the film industry, of which they are also a part. Both the actors retorted at Mrs. Bachchan’s comments.

Another highlight remained defense Minister Rajnath Singh’s statement on the Indo-China border dispute, where he said that the nation will not tolerate any mischief from the bordering nation. India is ready to challenge every move by China to change the status quo along the LAC.

The Opposition Congress, walked out of Lok Sabha when they were allowed to question Rajnath Singh on his statement. They had been pressing for a discussion on the border dispute with China.

The day before, Prime Minister Narendra Modi addressed the media and expressed solidarity on behalf of all parliamentarians in standing with our soldiers guarding India’s borders.

Day two also saw the passing of the Aircraft Amendment Bill, which gives statutory powers to DGCA India, AAIB and BCAS. This bill with bolster the Safety/Security infrastructure in India’s civil aviation sector.

Looking at the devastation caused by the COVID-19 plundering the economy all the MPs unanimously decided to forgo part of their salary for the next couple of years. The Lok Sabha has unanimously passed the bill to cut salaries of all MPs by 30 per cent for the next two years.

Another takeaway from today’s highlights include Congress questioning the BJP government on misleading the nation on Chinese incursion. Saying that the nation was standing with the military, Congress spokesperson Surjewala questioned ‘how China managed to occupy our land’ and why did ‘PM Modi mislead people that China has not infiltrated in our region’?

The defense Minister will address Rajya Sabha tomorrow at 11 am after briefing the Lok Sabha on India-China standoff on Tuesday. The Lok Sabha also passed the Essential Commodities (Amendment) Bill, 2020 on Tuesday.

Kozhikode plane mishap was a disaster in waiting, say experts