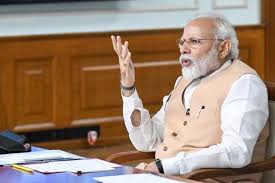 Looking at the perilous COVID-19 situation in the country, Prime Minister Narendra Modi has called for a meeting with chief ministers of seven states on Wednesday. These states are primarily the ones that have added to the country’s caseload of COVID-19 cases. The webinar is taking place just ahead of the completion of Unlock 4.

Ever since the nationwide lockdown was enforced on March 25, due to the pandemic, the PM already had a string of virtual meetings over the last few months with chief ministers of all the states.

The seven states, the chief ministers of which would meet the PM on the virtual event are Maharashtra, Andhra Pradesh, Karnataka, Uttar Pradesh, Tamil Nadu, Delhi, and Punjab. The coronavirus cases in these states are surging at an alarming rate. Together, these seven states account for 63 percent of the total cases in India.

Maharashtra, Punjab, and Delhi together are reporting a case fatality rate of at least 2 percent. These states have recently reported a daily uptick in the number of cases also.

On Tuesday, India breached the 5.5 million mark in terms of the number of COVID-19 cases. However, according to the Union health ministry, the country’s active cases are less than a fifth of the total tally.

Apart from conducting regular virtual meetings with the chief ministers of the states, the center is also sending its team to help state governments in containment, surveillance, testing, and effective clinical management. During the meeting, it will be ascertained whether these seven states need central guidance at this point.

The central government had recently sent a team to J&K. Moreover, a Centre-Delhi government joint team is monitoring the Covid-19 situation in Delhi. The national capital has reported 3,816 fresh cases on Tuesday, taking the total tally to over 2.53 lakh and mortality to 5,051.