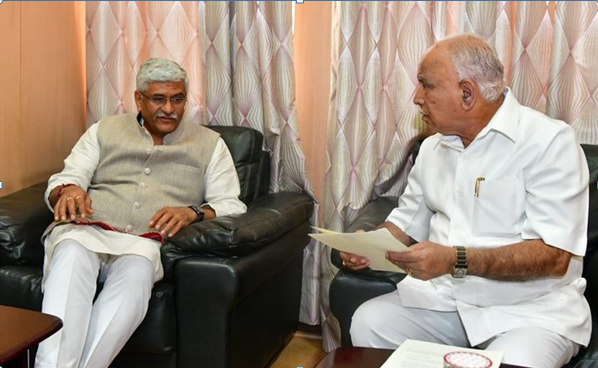 The Bharatiya Janata Party (BJP) has approached the National Human Rights Commission against the Uddhav Thackeray government of Maharashtra.

In a letter to NHRC chairperson HL Dattu, Rajya Sabha MP Bhagwat Karad and Dr. Vikas Mahatme led by Rajya Sabha member Vinay Sahastrabuddhe told the commission that incidents of human rights violations have increased in the state since December 2019. It is claimed in the letter that the right to freedom of speech, life and equality etc. have been violated in Maharashtra during the stipulated period. The letter claimed that those who write on social media against Chief Minister Uddhav Thackeray and his government are tortured by the Shiv Sena workers.

The letter mentined the incident of 23 December 2019, when a person named Hiraman Tiwari commented on the social media against Chief Minister Uddhav Thackeray, then the leaders of the ruling Shiv Sena attacked him and made him bald.

BJP MPs also raised the case of mob lynching of two sadhus and their driver in Palghar, Maharashtra on April 16. The BJP delegation said that human rights violations were taking place in the Uddhav Thackeray government. In such a situation, the National Human Rights Commission should take action against the culprits while taking cognizance of all the cases.

The letter also mentions that Madan Sharma, a retired naval officer, was beaten by 8 to 10 people over a social media post. The letter claimed, “Rights like freedom of expression of citizens has beenattacked for criticizing the state government and this is done with the help of state sponsored violence.”

The MPs also claimed that complaints were lodged against journalists and actor KanganaRanaut after vocal criticism of the state government.

“The government suppresses any voice of the opposition with the help of the state machinery,” the letter said. The letter claimed, “Posting derogatory material against the Prime Minister or any other person in the opposition is easily overlooked due to the discriminatory practices adopted by the Maharashtra State Government.”

Alleging that there are incidents of human rights violations in the state including right to life, freedom of speech and right to equality, BJP MPs asked the NHRC to investigate.

On the other hand, BJP MP and13th direct descendent of Maratha King Chhatrapati Shivaji, Chhatrapati SambhajiRaje, has sent a letter to Chief Minister Uddhav Thackeray demanding that notices should not be sent to Maratha protesters. “It is the right of every individual and society to fight in a democratic way. Without strangling that right, the Maratha community should be allowed to express their displeasure, ”SambhajiRaje wrote in the letter.

The letter further read, “The Supreme Court has postponed the reservation given to the Maratha community. Since then, an atmosphere of unrest has been created in the society. Therefore, the organizations in the society have taken the role of agitation. Meetings of the entire Maratha community are being held at the district level and the direction of the agitation is being decided. But the police administration has started issuing notices to some protesters. The police administration has started putting pressure on the protesters in Nashik, Pune and Marathwada by making personal phone calls and issuing notices.”

SAD-BJP fall apart despite being allies for decades after govt. passes farm bills