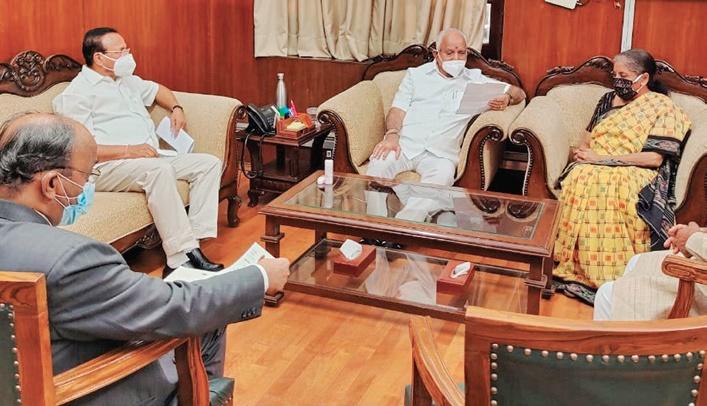 Karnataka Chief Minister BS Yeddyurappa met Union Finance Minister Nirmala Sitharaman on Thursday and urged the Center to accept the 14th Finance Commission’s recommendation of giving a special grant of Rs 5,495 crore to the state. The special subsidy has been recommended to the state due to low share in central taxes.

In a meeting with the Finance Minister, Yeddyurappa demanded the release of pending funds under various heads. The Karnataka Chief Minister further informed that the state government received only Rs 869.40 crore as demonstration grant for urban and rural local bodies, whereas the recommendation is for 2,100. 25 crores. According to the statement, the Chief Minister requested to release the remaining amount of Rs 1230.85 crore. Yeddyurappa is expected to meet Prime Minister Narendra Modi and BJP national president JP Nadda on Friday.

It is to be noted that the Ministry of Defence has considered the Karnataka government’s proposal for establishing a Research Cell of the DRDO at Kuvempu University, but the state is expecting a full-fledged independent DRDO Laboratory in Shivamogga with an ample number of scientists and technocrats, the Chief Minister was quoted as saying in an official release.

According to the official release the CM has claimed that the laboratory can explore natural remedial measures for military use from the Western Ghats region. Further, it has also assured that land required for the construction of the laboratory as well as the official quarters for the personnel will be provided by the state government.

Yeddyurappa told reporters, “I have come to Delhi to discuss the development works of the state with many Union ministers. At the same time, I will also discuss cabinet expansion with the leaders of the party and know their views. “

The Chief Minister is accompanied by his son and BJP State Vice President BY Vijayendra. Yeddyurappa is under pressure to expand the Karnataka cabinet soon to convince disgruntled MLAs, though he is not keen on such a change.

Meanwhile, the state Health and Family Welfare Minister B.C. Sriramulu, on Thursday, allegedly wrote a letter to the famous Goddess Durga (Gade Durgamma), seeking her blessing to become Deputy Chief Minister soon. Karnataka is currently grappling with increasing cases of Corona. However, in the initial month after March, the state was successful in stopping the epidemic, for which the state government was also highly praised. But after the unlocking process started from June, Corona cases in other parts of the state, including the capital city of Bengaluru, increased rapidly. At present, there are more than one lakh active cases in the state. Although Karnataka has been much better in terms of a death rate. Despite nearly five lakh corona cases, there have been about seven and a half thousand deaths in the state, which is almost half as compared to the neighbouring state of Maharashtra.

SAD-BJP fall apart despite being allies for decades after govt. passes farm bills