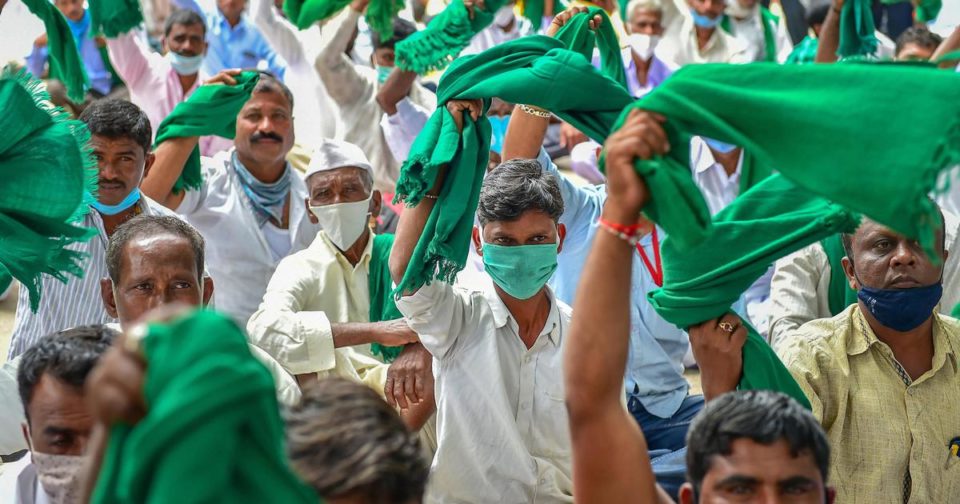 Pro-farmer organizations are observing Karnataka bandh today to protest against the farm bills. Pro-Kannada organizations have also extended their support to the bandh. This is against the amendment of the BS Yeddyurappa government in the State Closed Agricultural Products Market Committee (APMC) and the Land Reforms Act.

It has been reported that Karnataka Rajya Raitha Sangha and HasiruSene, & other organisations are protesting in front of Sir Puttanna Chetty Town Hall in Bengaluru. While protesters sit on road in Hubli, in a bid to stop public transport amid statewide bandh today. Parallelly, All India Kisan Sabha & other organisations are protesting in front of Hemavathi statue in Hassan & hold bike rally, in protest against the farm bills.

Farmers’ organizations in Karnataka had called for a state-wide bandh on Monday to protest against amendments to the Agricultural Produce Market Committee (APMC) and Land Reform Acts introduced by the BS Yeddyurappa government. Several trade unions, pro-Kannada organizations including Congress and JD (S) supported this Bharat Bandh, which also opposed the bills in the assembly.

Farmer’s organisations had informed that in Bengaluru, protest marches are planned from Town Hall to Mysore Bank Circle against “anti-farmer” legislations. They said that the services of freight transporters, taxis, auto-rickshaw drivers and private bus drivers are likely to be unavailable as they have expressed solidarity with the protests.

However, state-owned public transport, bus and metro services will operate normally. Defending the bills, the government warned of stern action against any forced enforcement of the bandh. Government ensured that all necessary steps will be taken to guarantee that there is no disruption in the normal functioning of its offices, hospitals, shops and establishments and that the services of taxis and buses are maintained.

Police have said that several measures have been taken to ensure that there is no untoward incident. They further added, ‘We have not allowed anyone to protest and senior officers have been deployed to monitor things. We will not allow anyone to forcibly stop activities. “

Meanwhile, Karnataka Chief Minister B.S. Yeddyurappa on Sunday said that his government is supportive of the farmers and added that there is no ‘scope’ for the movement and people can carry out their day-to-day activities as usual. He said, “I had called the leaders of farmer organizations and discussed with them the stance of our government and the Prime Minister’s will.”

It is to be noted that, The Karnataka Agricultural Produce Marketing (Regulation and Development) (Amendment) Bill and the Karnataka Land Reforms (Second Amendment) Bill were passed in the Legislative Assembly on Saturday despite stiff opposition. However, controversial bills related to agriculture and labour reforms, which were passed by the assembly, failed to go through in the legislative council on the last day of the monsoon session.

The two bills passed by the Assembly are amendments to existing laws that make it easier to buy agricultural land in the state. The Congress, the principal opposition in Karnataka, said the amendments reflected the BJP government’s aim of keeping farmers as “slaves”.

The common people faced trouble due to the statewide protests on Monday as many passengers arrived at the KSRTC bus station in Mangalore to travel. A huge crowd was seen at the bus station. Normal traffic was seen in Shivamogga. A heavy police force was deployed at Kalaburagi.