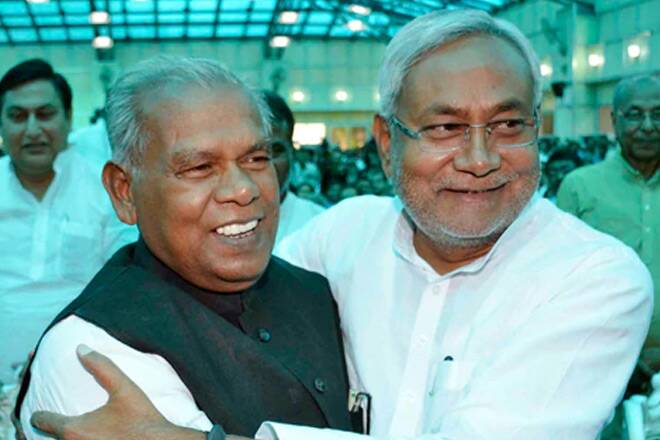 Former Bihar Chief Minister and President of the Hindustani AwamMorcha (HAM) Jitan Ram Manjhi will formally be a part of the National Democratic Alliance on Thursday. When Manjhi announced this a day ago, no NDA leader was present at the time. On this occasion, he lashed out at Rashtriya Janata Dal supremo Lalu Prasad Yadav and his son Tejashwi Yadav. Manjhi said he became part of the Grand Alliance on Lalu’s request. Manjhi also described Tejaswi as an inept leader who has is just the eighth pass. At the same time, he praised Chief Minister Nitish Kumar.

It should be noted that on 20 August, HAM announced its decision to move away from the RJD-Congress-led Mahagathbandhan. Soon after, JitanManjhi met Nitish Kumar and floated rumours of him returning to the NDA fold.

Jitan Ram Manjhi has said that he has an alliance with Janata Dal-United and since Nitish Kumar is part of the NDA, he is with the NDA. Manjhi further clarified that he will work with Nitish Kumar as his partner.manjhi also assured that his party is not going to merge with JDU as he said. “Hindustani AwamMorcha will work as a partner with JDU, and the party has not merged with JDU.”

On the question of seats in the assembly elections, Manjhi replied “HAM has joined the NDA unconditionally. They will decide the seats with JDU.”

“Jitan Ram Manjhi will be making an official announcement on Thursday regarding Hindustani AwamMorcha joining the NDA. Our party is not merging with JDU but we will be joining NDA as a separate entity. We will carry forward the developmental work done by Prime Minister Narendra Modi and Chief Minister Nitish Kumar,” HAM spokesperson Danish Rizwan said.

On the RJD’s question of making his son an MLC, Jitan Ram Manjhi directly targeted Tejashwi Yadav. Mnjhi said that his son is not like Tejaswhi who is just eight passes, he is MA-PhD and he was made an MLC on merit and not mercy.

Manjhi also hinted on not contesting the assembly elections as he said, “one should not remain inactive politics after the age of 75 and should not contest elections. Because of this, I am thinking of not contesting the assembly elections. However, the final decision (Nitish Kamar) will be taken only after knowing the opinion of our coalition partner (Nitish Kumar).” Bihar Deputy Chief Minister Sushil Modi has welcomed Manjhi. JDU spokesperson Rajiv Ranjan has said that our family has grown with the arrival of Manjhi. According to sources, the deal which Jitan Ram Manjhi has struck with Nitish Kumar is that Hindustani AwamMorcha will be getting nine seats to fight from the JDU quota in the NDA seat-sharing arrangement