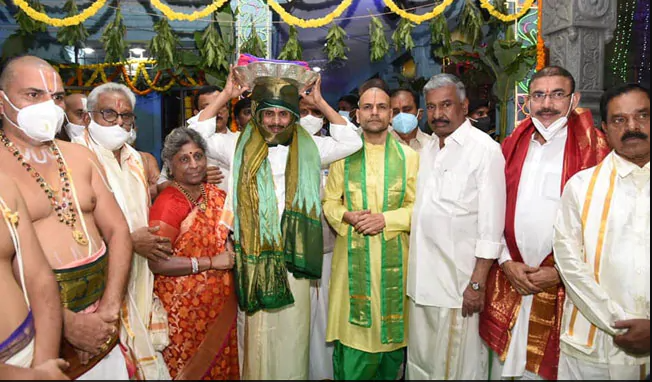 Andhra Pradesh Chief Minister JaganmohanReddy’S visit to Tirupati temple on Wednesday was engulfed in controversies as protests began across the state when Jaganmohan Reddy visited the temple. Activists of Chandrababu Naidu’s Telugu Desam Party and Bhartiya Janta Party (BJP) demonstrated protests in all the cities of the state.

TDP activists were angered by Jaganmohan Reddy’s opposition to not declaring his faith in God. The TDP demanded Chief Minister Jagan carry out the temple tradition.

It is also reported that Jagan is facing strong hostility from the TDP and BJP as there have been incidents of attacks in several temples of Andhra Pradesh in the last few months. The opposition alleges that Jaganmohan Reddy’s government was silent during the attack on the temple. However, Jagan Mohan Reddy appeared in Tirupati temple with full faith despite antagonism from the opposition.

“Ever since he took over as the chief minister of Andhra Pradesh, more than 80 temples have been destroyed in the past 15 months. To date, not a single miscreant has been arrested. Now, his decision of not signing the faith declaration form brazenly violates the tradition of the Tirumala Tirupati temple,” said TDP spokesperson Pattabhi Ram Kommareddy.

Earlier on Wednesday, Andhra Pradesh Chief Minister YS Jagan Mohan Reddy met Union Home Minister Amit Shah. Reddy discussed issues related to the development of the state with the Home Minister during his visit to Delhi. after the Chief Minister reached Delhi, the two met for about an hour on Tuesday evening. During this time the issue of Central Fund was also discussed.

According to the law of bifurcation of Andhra Pradesh, the state is eligible for central funds. Reddy told Shah that Andhra Pradesh had suffered a lot since its partition, which led to the birth of the Telangana state – while the coronavirus epidemic has proved to be a double whammy.

Reddy, told the Home Minister that the state was struggling with a shortage of funds and sought central assistance to deal with the crisis. The Chief Minister also discussed issues related to women’s safety initiative, direction and abolition of the Legislative Council. After concluding his Delhi tour by Wednesday afternoon, Reddy left for Renigunta near Tirupati from Delhi. He will then leave for Tirumala temple by road.

He also requested the Union Minister to expedite the rehabilitation assistance in the Polavaram project. Reddy met Shekhawat before meeting Home Minister Amit Shah and discussed irrigation projects in the South Indian state.

Shekhawat promised Reddy to cooperate in completing the Polavaram project by 2021. During the meeting with Shekhawat, Reddy was accompanied by Rajya Sabha member Vijay Sai Reddy and others.