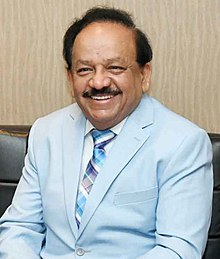 Union Health Minister Harsh Vardhan has asked the people not to be complacent based on the ICMR Sero survey report. The Indian population is far from achieving herd immunity said the health minister. His warning came on the weekly interaction Samvaad, which he has been holding for the last three weeks with his social media followers. “Even the soon-to-be-released second sero-survey’s indications are that we are far from having achieved any kind of herd immunity which necessitates that all of us should continue following COVID-appropriate behaviour,” he added.

Even the WHO has warned people against trying to achieve herd immunity assuming that it will save them.

“Herd immunity or natural population immunity is not an option. Let’s put our energy, focus, workforce, actions into what works,” said Maria Van Kerkhove, COVID-19 Technical Lead from WHO.

The health minister said that all states and Union Territories have been advised to reduce the price of COVID-19 tests. He had communicated to states and UTs to involve private labs at mutually agreeable lower prices. Committees and experts have also been appointed to look into the ominous aspects of the pandemic such as harm to the lungs, organ systems, especially cardiovascular and renal.

“In the early days of the pandemic, as the kits were imported, the price tended to be high. But now, supplies of testing kits have also stabilised, and domestic production of these kits has also commenced,” said Harsh Vardhan.

However, India is one of the worst COVID-19-affected nations in the world. The country has crossed the 60-lakh mark and the latest million has come in the last 11 days.

Rahul Gandhi likely to be part of farmers’ agitation in Punjab

Indian companies may procure Covid-19 vaccines for its employees