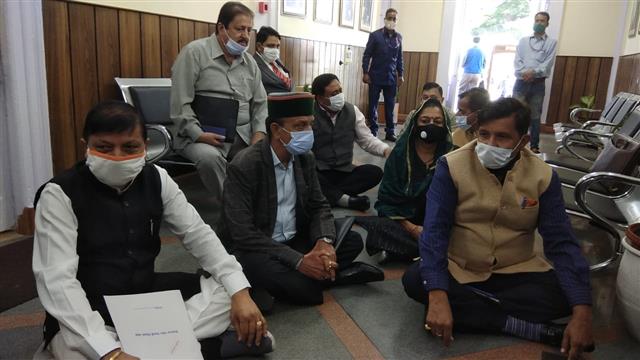 The seventh day of the Himachal Assembly Monsoon Session began with an uproar. Even before the proceedings of the House began, the Congress (Congress) Legislature Party staged a sit-in outside the Speaker’s office and laid siege. All the MLAs (MLA) headed by the Leader of Opposition Mukesh Agnihotri reached outside the office and started protesting and after that, they walked out for not discussing the Benami deals in the House. Congress MLA Rajendra Rana while talking to the media said that the assets of all ministers and their families of the state government should be investigated. Where have the ministers purchased the land during the last three years? The government should discuss this.

It is to be noted that recently, a minister of Jairam government was accused of horse-trading. On this, the opposition demanded a discussion on Benami deals on Tuesday. When the demand was rejected, the Congress MLAs came out of the House shouting slogans.

Before the commencement of the proceedings on the seventh day, the Leader of Opposition, Leader of Opposition Mukesh Agnihotri, sat on a dharna outside the chamber of Speaker Vipin Singh Parmar. Congress legislators alleged that the government was suppressing the voice of the opposition. The media is also being pressured not to publish the news. He further alleged that discussions requested by the opposition are not being conducted even within the House.

After this, the proceedings of the House started at 11 am, then the opposition stayed the proposal to stop work under Rule 67. Stopping all the work, the opposition remained adamant to discuss the Benami property matters in the state. On this, Speaker Vipin Singh Parmar said that information has been received from Congress MLAs Rajendra Rana, Ind Dutt Lakhanpal, Nandlal, Mohan Lal Brakta and Jagat Singh Negi on the adjournment motion under Rule 67 and permission has been sought from the government for the discussion over Benami Properties and as soon as the approval is received it will be discussed.

Commenting on the action of the opposition, Parliamentary Affairs Minister Suresh Bhardwaj said that the opposition is harming the people of Himachal.

Suresh Bhardwaj said, “In Rule 67 all the work of the house has to be stopped for discussion. The subject should be very important for this but the opposition has no facts in the case of Benami properties and therefore the discussion is not important.”

The Chief Minister, Jairam Thakur, also did not seem very happy by the action of the opposition as he said, “A lot of information has to be collected and effort has to be put in to run the question hour this is the reason that this question hour should have been conducted. This session was kept for ten days instead of four or five days due to fewer meetings in the budget session. The government got the adjournment motion discussed for the first time because the subject of Covid-19 was so big.” He added, “Opposition has given notice under Rule 67, but when the speaker informed that the government’s comments have been sought on the matter and it will take time, the opposition must have allowed the question hour. The opposition has failed to maintain the dignity of the house and they have not done it once but many times. It is for the first time, that Opposition sat outside the Speaker’s room on a protest.”