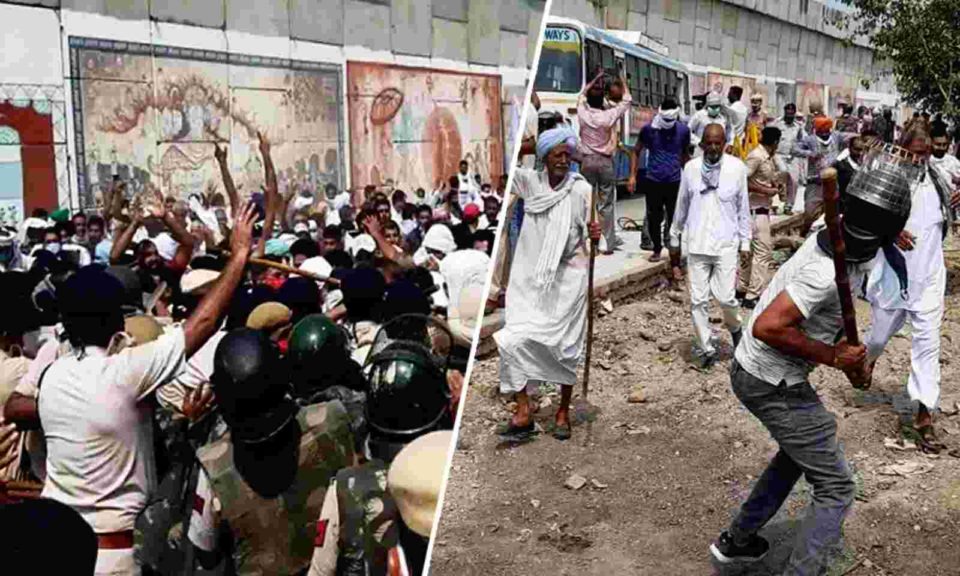 The lathi-charge by police during the farmers’ rally in Pipli in Kurukshetra on Thursday has started taking the shape of a political agenda as Congress is now preparing to launch an attack on the Haryana government on this issue. Congress national spokesperson Randeep Singh Surjewala arrived in Pipli on Friday where he met the farmers.

Surjewala further claimed that BJP-LJP had also sent their private goons to beat the farmers. “There were many people among the police who were wearing in jeans and a T-shirt along with the police helmet but, were seen beating the farmers. Were these people policemen or private goons of BJP-JJP?” said Surjewala.

It is to be noted that under the banner of BharatiyaKisan Union (BKU) hundreds of farmers blocked the national highway-44 to protest against the central ordinances for the agriculture sector. As they marched towards the grain market, police lathi-charged them for defying the administration’s warnings during a raging coronavirus pandemic.

The centre had passed the Farmers’ Produce Trade and Commerce (Promotion and Facilitation) Ordinance, the Farmers (Empowerment and Protection) Agreement on Price Assurance and Farm Services Ordinance, and an amendment in the Essential Commodities Act, 1955, in June earlier this year.

Centre claims that these three ordinances will a friendly environment between farmer and trader, However, farmers allege that in the name of reforms, the government is planning to discontinue the MSP regime.

Surjewala called the passing of these ordinances a conspiracy of Modi government. He said “The BJP wants to sell the entire farming system to a handful of companies. That is why, under a conspiracy, three black laws were brought through an ordinance in the midst of the corona epidemic, so that the nexus between the peasantry and the labourer is ended and the entire agricultural system is bound into the shackles of slavery.”

Surjewala also questioned that if Chief Minister Manohar Lal Khattar can hold the rally to take the office of BJP President, then why were the farmer beaten up for holding a rally to raise their voice against oppression?

The former chief minister of Haryana Bhupinder Singh Hooda also expressed anger over the police lathi charge as he said, “By bringing three anti-farmer ordinances during the coronavirus pandemic, the government has forced the farmer to come out on the streets and protest. No ordinance can be in the interest of the farmers unless it guarantees minimum support price of crops and there is a discussion in Parliament. If the government wants to make any changes in the system, it will have to guarantee the protection of the mandi and the MSP system.”

BharatiyaKisan Unionchief Gurnam Singh said, “The voice of farmers has to be raised, we want withdrawal of these anti-farmer ordinances, which will destroy the peasants and leave them at the mercy of market forces.”

Covid-19 vaccine tracker: Need not be ‘overly discouraged’, says WHO after AstraZeneca pause