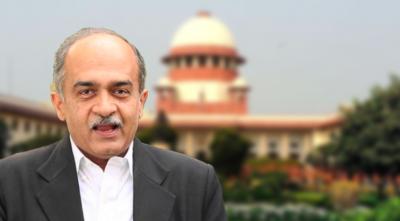 The verdict in the contempt case involving lawyer-activist Prashant Bhushan is out which held him guilty for his tweets criticizing Chief Justice of India SA Bobde and the Hon’ble Supreme Court.

The SC sentence said that Bhushan is guilty of the tweets he made and more so after he refused to apologize for it. The Supreme Court imposed a fine of Re. 1 for contempt and gave Bhushan time till September 15 to deposit the fine. If he fails to deposit the Re.1 he will be sent to jail for three months and would be banned for three years.

The order was reserved on August 25 by a bench consisting of Justices Arun Mishra, Krishna Murari, and BR Gavai after Bhushan declined to apologize for his tweets.

“Bhushan’s tweets seek the improvement of the administration of justice… Let democracy follow in this case when he has exercised his free speech… It will be tremendously appreciated if the court leaves it at that,” said Attorney General KK Venugopal in the last hearing.

One of his tweets blamed the previous Chief Justices of India for destroying democracy in the country over the last six years. Another tweet commented on a photo of Chief Justice Bobde sitting on a Harley Davidson, where Bhushan commented that he was not wearing a mask and a helmet while keeping the court in lockdown and keeping the citizens away from getting justice.

The bench then argued with Bhushan that there is nothing wrong with apologizing and he would be acquitted after that. However, Bhushan refused to do so. They also gave him thirty minutes to ponder upon his decision. However, since he remained adamant about not apologizing the bench had to reserve the order on that particular date. The counsel for Mr. Bhushan, Rajeev Dhavan countered that asking his client to tender an unconditional apology and giving him time to think as well was “an exercise in coercion”. He argued that he should be forgiven with a message. “One cannot be silenced forever… A message that he (PrashantBhushan) should be little restrained in future should be enough.”

Budget 2021: Impetus on vaccine, farmers, elections, respite for seniors above 75