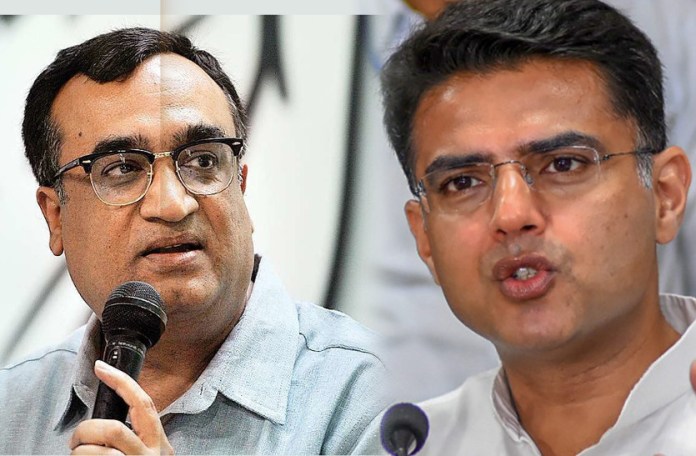 The newly appointed AICC general secretary in-charge of Rajasthan, Ajay Maken, will hold a meeting with the leaders of Jaipur, Alwar and Sikar divisions at the PCC office today. Maken would be having a tough task at hand as a day before factionalism came to the fore in Ajmer’s meeting.

Maken will discuss with the Congress party workers on more efforts can the state government put, in the public interest so that the respect of the Congress worker on the ground can increase. It is to be noted that Ajay Maken had arrived in Jaipur for a feedback meeting on 30 August. After meeting for two days, he returned to Delhi due to the demise of Pranab Mukherjee. Now the feedback meet is all set to kick start again.

In this plan, the focus will be to get more respect Congress workers, workers will put in the effort to make Congress image good and strong throughout the state. Party workers will also be working on how to eliminate factionalism in the party. Additionally, the details of all these feedback meetings will also be passed on to the Congress high command. The information has been sent to the concerned leaders to meet Maken.

Earlier, Ajay Maken, who arrived in Ajmer on Wednesday, held a meeting of the officials of the countryside and the city Congress at the Hotel Merwara Estate. While Maken was busy in the meeting with officials inside the hotel, supporters of Sachin Pilot shouted slogans against Medical Minister Raghu Sharma, outside. The supporters of Sachin Pilot further tore posters of the Health minister and called Raghu Sharma a fraud.  Pilot supporters said that Raghu Sharma had cheated Pilot, which has angered him. Seeing the supporters of Sachin Pilot shouting slogans, Raghu Sharma’s supporters also reached the venue and started shouting slogans in support of health minister Raghu Sharma. As the tension between the supporter of Pilot and Sharma started ti intensify Police officers reached the spot before the two sides clashed. Police then separated the two sides and normalcy was restored as the matter resolved. At the same time, it has also become clear that there is factionalism in Congress not only among senior leaders but also among the workers. Due to the very same reason now the Congress party will try to check on the status of the party in Jaipur.

US rescinds 1,000 China student visas, alleging they have ties to the military