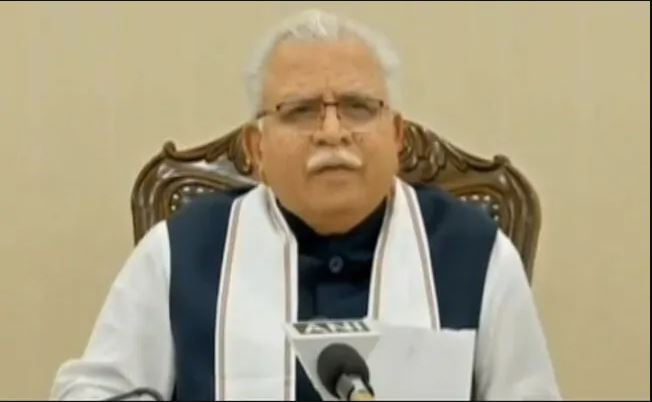 A video of Haryana Chief Minister Manohar Lal Khattar (Haryana CM Manohar Lal Khattar) is being shared on social media, in which he has said that the Haryana government will worry about the farmers here and ‘it does not need to worry about other states’. Chief Minister Manohar Lal Khattar said earlier this month, refusing to procure crops from other states. His statement is in sharp contrast to the three new Farm Laws brought by the Modi government at the Centre, in which the government says that farmers will get free freedom to sell the crop in the market of their choice at the cost of their choice. Khattar said these things on September 17 while praising the farmers’ laws.

The Haryana Chief Minister said, “We will ensure that the maize and bajra of Haryana farmers are completely bought. We won’t let it happen that farmers from other states will benefit by selling it in our state. We have to care about the farmers of our state. We don’t have to worry about other states.”

Further attacking the opposition the Haryana Chief minister attacked the Congress-led government of Punjab and Rajasthan saying that Punjab and Haryana are not buying maize and millet crops at MSP (Minimum Support Price), forcing the farmers of these states to sell their produce in Haryana.

Khattar said, “The Congress is making it political. But I have a question for them. Why are their governments in Punjab and Rajasthan not doing this (procure maize and bajra)? We will not procure maize and bajra from other states because it’s us who incur the losses. This is the share of the farmers of Haryana.”

Speculations are also ripe that Haryana Chief Minister Manohar Lal Khattar can meet Prime Minister Modi today. It is believed that the current situation in Haryana post Farm bills will be discussed in the meeting. At the same time, Khattar will also explain to the Prime minister how the Haryana government is explaining the benefits of farm bills to the farmers.

It is to be noted that Haryana Chief minister is in the national capital from the past two days. Khattar arrived in Delhi on Saturday where he met Union Ministers. He also met the BJP president JP Nadda and discussed the party and few appointments in the state.

Meanwhile, 50 farmers of Uttar Pradesh were stopped on the border of Haryana on Monday. These farmers were going to Karnal in Haryana to sell their produce in the government mandi when they were stopped at the border. It is being said that the district administration reportedly wanted to ensure that local farmers growing the same crop are given preference – as never before. However, the Haryana government says that farmers selling rice of non-basmati varieties will have to first register on a portal of the Haryana government and then wait for their turn.