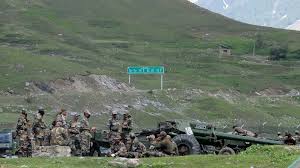 The ongoing border tussle with China is far from being solved as the area is on high alert even as corps commander-ranked officers of both countries are set to meet today. At the same time, the newly inducted Rafale jets are seen flying in the Ladakh theatre as both nations prepare to meet for the sixth military talks on Monday.

The meeting was scheduled to begin early in the day at Moldo on the Chinese side of the Line of Actual Control (LAC) across the Chushul sector. It was also supposed to involve a joint secretary-ranked officer from the ministry of external affairs to ensure that the meeting turns fruitful and becomes a success. This current faceoff between the two nations along the LAC has led to a significant military buildup by both countries.

The principal agenda for the upcoming military talks between Indian and Chinese corps commander-ranked officers was already deliberated at the high-level meeting, even as the atmosphere in Ladakh continues to remain tense after a series of recent maneuvers by the two armies in the Pangong Tso area.

The IAF’s current fleet of five Rafale fighters, newly inducted into its arsenal, is fully operational and ready to participate in any mission, say officials. India placed the order for 36 Rafale jets from France in a deal worth Rs 59,000 crore in September 2016.

In a ceremony on September 10, the air force formally inducted the planes at the Ambala airbase, though they landed at their home base on July 29. At the induction, IAF chief Air Chief Marshal RKS Bhadauria revealed that that the warplanes were mission-ready and the ceremony marked their “full operational induction” into the air force.

“Within this time (after the jets arrived), they have already flown and familiarised in our operational environment and have undergone intense integrated training with other combat fleets including the firing of advanced weapons. They are good to go and deliver,” Bhadauria said in Ambala. He further added that the warplanes couldn’t have joined the air force’s combat fleet at a more opportune time when the tension along the borders is increasing day by day. Both nations are trying to reach an agreement to defuse the tension. A high-powered panel on China reviewed the latest situation in the Ladakh sector last week. Its primary focus was to chart the course of future negotiations. Both parties want to restore the status quo ante of mid-April along the contested Line of Actual Control (LAC).